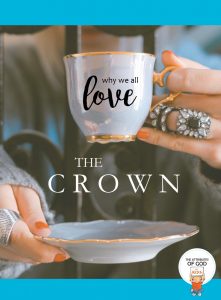 Why We All Love The Crown

Most of the country is frozen solid (yay January), which means one thing…Netflix. Everyone has been waiting for season 2 of The Crown, and it’s finally here! Cue the tea and posh hats.  (Caveat: It’s intended for adults and you may want the fast forward handy here and there).

Why do we all love The Crown? In part it’s the execution: nuanced character development, excellent acting, and masterful cinematography.  In part it’s the intrigue: a glimpse into the fabulous yet trapped lives of royalty, with scandals abounding, and protocols and politics to maneuver.

As illustrated by the introductory images, the undercurrent of the entire series is in fact “the crown”.  Throughout the series we watch the juxtaposition of humanity and royalty. We watch a young woman lose her father and inherit a title she was never expected to hold. We journey through her trials and growth.  We see the sacrifices she makes, giving up her personal freedoms and preferences to faithfully execute the sovereign role of the crown. In one moving scene, she confides loneliness to a young Reverend Billy Graham, that as the head of the church of England there is no one above her besides God himself. She longs to forgive but struggles because as the crown, she is tasked with justice. As near to God on earth as anyone, in her humanity she is unable be the one Sovereign she sees above her.

Americans are not generally the type to submit to authority. We are a westward exploring, bootstrap pulling, entrepreneurial lot who leaves tradition behind in favor of progress and productivity.  Perhaps we are an independent bunch, but for some inexplicable reason, we remain drawn to The Crown.

We watch for castles, jewels, scandal, and intrigue, but beneath it all we find ourselves watching with a surprising longing for a sovereign crown. In the United States, we talk of our representative democracy with pride and yet disappointment. We consider it a system necessary in a world of broken humanity. We elect our human leaders with anticipation, followed closely by disappointment.  Some think, “If only the other party would lead…then all would be well”. Some think, “If only a different person from the party would lead…then all would be well”. And some think, “If only we had a different system…then all would be well”.  Within us is a desire to be led by someone who is above it all. Someone who transcends the list of failed leaders behind and before us. Try as we may, humanity can’t rule itself (at least not well).

If only we would look in the same direction as Queen Elizabeth II: to the Sovereign above us. If we as independent individuals and as a collective society would submit to the true Crown and Sovereign we would find the leader we are longing for.  We would find the one who was perfect in both humanity and royalty and as such, extends us His love, grace, and mercy while upholding His holiness, justice and sovereignty.

If only we would seek to know what our true Sovereign is like. Thanks to the exquisite performance of actress Claire Foy, episodes of The Crown make us feel like we know the Queen. After watching her life unfold, she no longer seems like a mysterious ruler waving from a balcony, but someone whose life and personality we understand. God, the true Sovereign, is not a mysterious ruler waving from afar, but someone whose life and character we can understand.

Teach your kids the character of God with The Attributes of God for Kids. This bright, engaging devotional or curriculum resource is for kids ages 4-11. 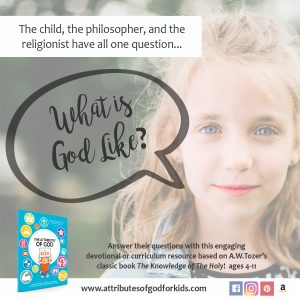